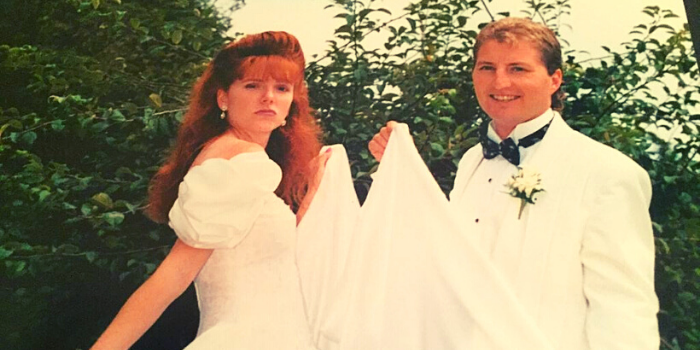 Having grown up with a beloved Six grandfather and having been married to a Six for almost 30 years, I know quite a bit about Enneagram Type 6 romantic relationships – both from observation and from personal experience. Let’s dive in!

To start, here’s a quick review of what it looks like to be an Enneagram Six.

Riso & Hudson call Type Six The Loyalist and describe them as the Committed, Security-Oriented Type: Engaging, Responsible, Anxious and Suspicious. Located in the Head or Thinking Center of Intelligence, along with Types Five and Seven, Sixes process the information coming in from the world by thinking about it and using the logic center of the brain to try to make sense of it.

The Head types have these central underlying questions running through their psyches: “Where can I find guidance?” “How do I move forward in the world?” The Six is after guidance, and they will look for it in others, in groups and in themselves but are never quite satisfied with any of the answers they receive. Trust comes hard for Sixes, and their fear can make them suspicious. Since they long to find something outside themselves to believe in, Sixes look for an institution that they have some affinity with, that somehow helps them to feel safe and supported. It can be an actual safety-related group, such as martial arts, or a group whose ideals they can get behind, like a faith-based group or political party. Once they have found this group, they become some of the most loyal and dedicated of its members. They will arrive first and leave last, doing all that is expected of them so that they can maintain their place within the group and continue to feel supported.

It’s important to understand, first of all, that Type 6 is a Fear type whose “passion” [the thing that makes them suffer] is what Russ Hudson calls angst. It’s a stronger and more specific word than anxiety, the term usually used for Head types in general and Type 6 in particular. Angst essentially means a deep, unfocused dread. Sixes have the idea that something is about to go wrong, but they aren’t sure what. This is where their characteristic vigilance comes from.

How does this manifest in romantic relationships? Well, it’s one of the underlying factors that causes distrust in Sixes. Because they don’t have all the information they need about everything, they don’t know what to trust in. They are dreading that something bad will happen at any moment, and that includes the relationship. Can they trust their beloved? Is their beloved going to betray them?

It can feel pretty devastating to the beloved when they find out that their Six doesn’t really trust them. It feels like an attack on their character. But when you understand that this is just the way the Six personality works, and that it’s actually not personal most of the time, you can have more compassion for their plight and accept your Six as she/he is.

This is good advice for all human relationships, but it’s critical for those in a romantic relationship with a Type 6: don’t do things that are untrustworthy. Don’t hide money, get caught texting ex-partners or anything else that seems like you don’t trust your Six or are not satisfied with them. Sixes often suffer from low self-esteem, so anything that seems like you are searching for greener pastures will send them into greater anxiety.

That may look like the silent treatment, a lot of pleading and crying, or “testing” – a standard Six tactic where they see how much you’ll take to test the strength of your love. Sixes are an Emotional Realness type, so the emotion can get very real and intense if the Six is afraid that your relationship is on the rocks.

On the flip side, a Six is most likely not going to betray you. Though anything is possible, depending on the Level of Development, Enneagram Type 6 romantic partners are generally faithful through and through. Loyalty is, in fact, one of their chief characteristics. Also, the longer a relationship progresses, the greater the likelihood that your Six will come to trust you.

The Six will be a dependable partner, ready to help you out in any way you need. I call my husband my “Life Technical Adviser” because he is very practical and able to help me in a million ways with technology and other issues I can’t figure out. When I do a live event, he is my camera man and facilities expert, setting up chairs and checking the lighting. That’s the kind of person you could spend your whole life with.

Here are a couple of things I’ve learned about romance with an Enneagram 6:

Suzanne Stabile writes in The Path Between Us that Sixes appreciate people who are authentic and genuine; they watch to make sure your actions match your speech. So make sure you are your real you with them so they won’t become suspicious. And just because that’s also a good thing to do with all people in your life! She also writes that just telling your Six, “You should trust yourself more” isn’t helpful, because if they automatically could, they would! Instead, remind your Six of times in the past when they were able to trust themselves and their own abilities.

Because many Sixes are looking for stability in institutions, the institution of marriage can be a place of safety for them, or a place of loyal skepticism – or both, depending on how secure the Six is feeling about the relationship. Getting to the place of commitment can be difficult for some Sixes, because they don’t truly trust the advice of anyone, including themselves. So, it feels scary to make such a huge decision. For the Six, this may be a real leap of faith.

Once in a committed relationship, the Six will hold on for dear life, come what may. That’s great in the sense of reliability, as the divorce rate suggests that many people take their marriage vows far too lightly. You want to know that this person who promised “for better or worse” really meant it, so that kind of dedication is comforting. I take great comfort in the reliable, steadfast love of my husband.

However, this can also cause the Six to stay in a toxic situation for far too long. They hate and fear the idea of being betrayed, so they certainly don’t want to do that to another person. And however unhealthy the relationship may get, the Six may be so invested in remaining loyal to the other person that leaving feels impossible. Because Sixes can act in fearful (phobic) or courageous (counterphobic) ways, it can be tough to talk about relationships with a Six in general terms. So, here some other ways to identify what type of Six you are or that you love.

An Enneagram Six with a Seven wing (6w7) looks a lot different from a Six with a Five wing (6w5), so let’s take a quick look. Riso & Hudson call the 6w7 The Buddy. They are social yet insecure and rely on loved ones for reassurance and advice. Anxiety about a romantic relationship can lead to depression. Riso & Hudson’s name for the 6w5 is The Defender. They are more independent and serious, as well as less reassurance-seeking. They are often loners, which may make emotional intimacy more difficult.

As for the instincts, remember that there are three primary ones the Enneagram focuses on: Self-Preservation, Social and Sexual. The Wisdom of the Enneagram goes into more detail for each of these, but again, here’s a quick overview based on that book.

Finally, to see possible pitfalls and benefits of Type Six in relationship with each other type, you can check the section “Compatibility with Other Types” here. I hope this post has helped you gain more insight into how Enneagram Type 6 romantic relationships work – and how they don’t.