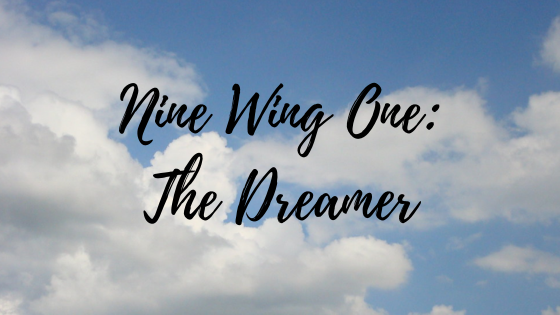 First, let me say that I love me some Nine. Warm and welcoming, Nines often give off the vibe that they’ve got all the time in the world for you. They are the most natural hang-outers of all the Enneagram types.

Before we dig into their One wing, let’s do a quick review of what the Nine on its own looks like. Nine is a core or anchor type in the Enneagram, along with the Three and the Six. Together, they form the inner triangle of the Enneagram symbol and rule the three Centers of Intelligence.

As the image shows, Nine resides in the Instinctual or Gut Center of Intelligence. People whose home base is in this Center tend to intuitively know things at a “gut” level and are dominated by the emotion of anger – some teachers even refer to it as rage. Though fellow Gut Types Eight and One can appear visibly angry, the Nines rarely show their anger. Instead, they are often asleep to their anger and instead seek peace by erasing their own desires and preferences.

Riso & Hudson note that the social role of the Nine is “nobody special.” They discount their own worth and prefer to stay in the background, believing that their opinions and preferences don’t matter. They are self-forgetting, asleep to their own desires and their own anger. Part of that anger comes from being overlooked, since the more they erase themselves, the more people ignore them, which eventually becomes a point of resentment for the Nine.

Nine may be the original personality from which all others sprang, and it’s thought to be the most plentiful of the Enneagram types. As Father Richard Rohr says in his book, The Enneagram: A Christian Perspective, Nine is the personality type of any older, pre-industrialized society, where the pace of life is slower and people do enough to get by but aren’t in a frenzied hurry like the industrialized, clock-bound nations.

Rohr also relates each type to a color, and for the Nine, it’s gold. The color represents Nine’s happiness, harmony and fulfillment. It is “the color of kings and saints…a symbol of enlightenment.” This seems particularly fitting visually, as the Nine sits atop the Enneagram symbol as a kind of crown.

To appreciate how a One wing influences the Nine, here’s a quicky review of the One. As noted above, they are also in the Instinctual/Gut Center and struggle with anger. Ones are perpetually disappointed in themselves, others and the world for not being perfect. They spend their lives trying to improve themselves and everything around them in an effort to placate their harsh Inner Critic. Enneagram Institute co-founder Russ Hudson describes it this way: Ones have a “fat” Inner Critic, also called the superego. The Ones are a Dutiful type, meaning that they do their best to obey their Inner Critic.

Skip ahead if you know this part. For those who don’t, a wing is simply the number on either side of any Enneagram type. Look at the symbol above again. You’ll see that the numbers to the right and left of the 9 are the 8 and 1. Those are the two wing options for Type Nine. The Nine’s core motivation will remain, but some of the Nine’s behaviors will be influenced by the wing’s type.

Riso & Hudson call Type 9w1 The Dreamer. They note that the traits of these two types reinforce rather than clash with each other. Both types repress their emotions – the Nine to avoid conflict and the One to sustain their self-control. The 9w1 is more cerebral than the 9w8 and also more in control of their emotions. The 9w1 can still display their anger, including the self-righteous variety, but it’s more likely to come out as critical and sarcastic comments than as a burst of rage. All Nines are interested in the topics of spirituality and philosophy, but 9w1s are particularly idealistic in this regard.

9w1 and the Levels of Development

Riso & Hudson discovered and articulated the Levels of Development for the personality types. The Levels explain how our degree of emotional wounding affects our behavior and how much self-awareness is available to us. Let’s look at the three Levels for the 9w1 – Healthy, Average and Unhealthy – from their book, Personality Types.

Healthy Nines with a One wing have a tremendous amount of integrity. They possess common sense and wisdom and are able to make wise judgements about others. When they need to act or make a judgement, they pay attention to issues related to objectivity and fairness – a great Nine/One combination. With their normal disposition toward seeing all sides, Nines of this variety synthesize ideas from multiple sources and find the common threads. They can be highly imaginative and creative, and the One influence helps them move out of the idea realm and share their vision of how the world could be with others. The Nine’s openness paired with the One’s objectivity makes the 9w1 a good therapist or friend, able to practice non-judgemental listening while exercising the desire to help with advice.

Average Nines with a One wing are idealistic and want to better the world in some way, so they often take up a cause that’s important to them. They are confident in the correctness of their opinions, and their basic beliefs are set in stone. Less openly passionate than their 8-wing counterparts, 9w1s exhibit greater emotional control and tend to be more orderly. However, they can get caught up in non-essential activities with a detached air that prevents them from focusing on long-term goals. They are complacent and disengaged, wanting to prevent all discord – but being an anger type, 9w1s have a testy, on-edge quality. That’s the disapproving, disappointed quality of the One influence.

But rather than erupting like 9w8s, average 9w1s smolder with indignation. They’ll use the passive-aggressive Nine tactic of being indirect and sarcastic. Propriety and respectability are important to this type of Nine, often with a morally superior bent that can lean all the way to Puritanism. They may display a “prim and proper” way of being. Nines with a One wing tend toward perfectionism, though not in all areas of their lives; some areas may suffer from neglect – even important ones.

In the Unhealthy range, 9w1s take their withdrawn stance to an extreme degree, looking like the low side of Type Five. Here, they are detached and show little emotion. Their anger can be extreme, but it’s compartmentalized and so shows up as impulsive behavior. The One resentment further unfurls as the 9w1 stews over perceived injustices and wrongs; they may think it’s in fact their job to punish those who have done wrong. Obsessive-compulsive behavior is possible here. If they don’t get help, unhealthy 9w1s tend to devolve to a very dissociated state that looks like autism.

Here is my usual disclaimer that it’s not a good idea to go around typing other people, as it robs them of their own journey of discovery and because you could be wrong! Some behaviors look similar but come from very different motivations. For instance, Sevens and Threes are usually very busy, but they are busy for quite different reasons.

Having said that, it’s nice to be able to look at famous people who exemplify the behaviors of a certain type. It helps give you a feel for what that type is like. So, here is a list of folks that Riso & Hudson include in The Wisdom of the Enneagram as having 9w1 personalities: Abraham Lincoln, Queen Elizabeth II, Carl Jung, George Lucas, Audrey Hepburn, Rose Kennedy, Walt Disney, Garrison Keillor and Norman Rockwell.

A dreamer can be someone who envisions a better future – or someone who fritters away their life in a world of peaceful fantasy. Enneagram Type 9w1 can go either way, so the title is apt. When 9w1s are able to be aware and present, not ruled by their personality’s patterns and compulsions, they “let go of the belief that their participation in the world in unimportant or unwanted,” according to The Wisdom of the Enneagram. Let us wish that for all Nines of either wing, as well as for all people. Imagine the dreams they could dream – and accomplish – then.