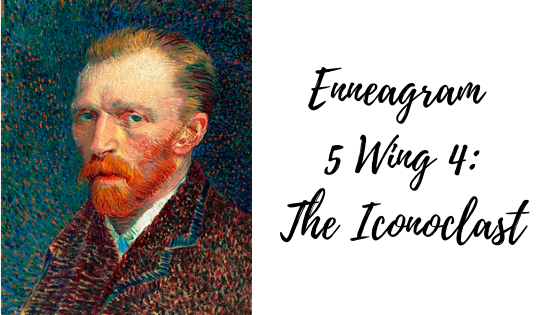 Welcome to an exploration of the Enneagram Type 5 wing 4. We’ll look at the different Levels of this type, famous exemplars, likely careers and more. But first, let’s do a quick overview/review of the Enneagram Five. (Feel free to skip this paragraph if you know the Five well.) Riso & Hudson call this type The Investigator and describe them as “The Intense, Cerebral Type: Perceptive, Innovative, Secretive and Isolated.” Fives belong to the Head Center of Intelligence, which means they receive and process information coming in from the world through their minds and logical processes. Fives have a Withdrawn stance, which means that they usually prefer to be alone and don’t need much social interaction. Fives are a Competency type; they strive to be deeply knowledgeable about one topic. They have a gift for focus, so they are able to study intensely, often arriving at innovative solutions or ways of doing things.

No, people who know the Enneagram don’t suddenly sprout wings! (But wouldn’t that be cool?) Rather, a wing is the number on either side of your Enneagram number if you’re looking at the symbol for the Enneagram of personality (because there are other kinds, but that’s a topic for another time).

So, the two wing options for a Type 5 are 4 and 6. We’ll see a little bit of the contrast between 5w4 and 5w6 in this post, but if you’d like to know more about the 5w6, you can check out my blog post here. Whichever wing the 5 has, he or she is still a 5 at their core, and the wing that’s most dominant will influence the 5’s behavior. Some people feel that their wings exert equal influence, but typically, one is stronger than the other.

Now we come to the main attraction: learning about the 5w4. How does the Four wing affect the Five personality? For starters, the Four wing turns The Investigator into The Iconoclast, according to Riso & Hudson’s Personality Types. The main characteristics of both these types reinforce each other in multiple ways. They both have a Withdrawn stance, so they can retreat to their inner world to prop up their sense of self and protect their personalities. They also both have a sense that there is something essentially lacking in themselves that they need to find before they can feel complete and fully live their lives. Type Five lacks confidence to act, and Type Four lacks a strong sense of identity, so the Type 5 wing 4 has a hard time relating with others.

This type is more emotional and introverted than the 5w6 but is usually more sociable. Talk about being an iconoclast! The 4 wing causes them to be more interested in things of a personal nature. There’s also a Head Type/Heart Type distinction here. Fives are cerebral and tend to observe experience and emotion (including their own), while Fours internalize their experiences to make their emotions more intense. Instead of exploding in confusion, these two types come together in the 5 wing 4 as a rich subtype that’s capable of both amazing artistic and intellectual achievements.

The Iconoclast and the Levels of Development

If you’ve read some of my other posts, you know that I spend time talking about the Levels of Development because they’re really important. They provide the “vertical” aspect to the Enneagram’s otherwise “horizontal” types. This means that the Levels help describe the different amounts of awareness and emotional health a person has. They explain why one Five can seem one way and another Five can seem so different. So, let’s apply the Levels to the 5w4. Again, this information comes from Personality Types.

At the Healthy level, in 5w4s there is a marriage of knowledge and intuition, as well as the aesthetic and the intellectual. 5w4s are often engaged in the arts as writers, musicians, designers, directors, choreographers and the like. They break the mold of the academic and/or scientific 5w6 – here again, they are Iconoclasts. This subtype gathers ideas, insights and knowledge together and synthesizes them in new ways of looking things. 5w4s also tend to use their imagination more than the analytical 5w6.

That’s not to say that the 5w4 is never involved in science. If that’s the case, they will be found in areas of inquiry that rely more on the intuition and less on experiments and the collecting of data. They are attuned to and appreciative of the inherent beauty in a mathematical formula, for instance. Beauty is a marker of truth for this type; beauty represents order, which to the 5w4 confirms that an idea is objectively right. Isn’t that fascinating? Intuition is, in fact, a major strength of 5w4s because it helps them find areas of knowledge where they have not yet found with their conscious thought. The Four’s desire for uniqueness adds a desire for a personal vision to the Five’s perceptiveness and inquisitiveness. This leads the 5w4 to “tinker” with what’s familiar until it’s almost unrecognizable. This can result in startling innovations in their field. Glance back up at the list of famous 5w4s and you’ll get a sense of what this looks like. The theory of relativity and “Starry Night” are the product of 5w4 personalities.

At the Average level, 5w4s have an emotional depth from the Four wing, but this makes it harder to sustain effort and to work with people. They are more independent that the 5w6; they don’t like deadlines and structures being forced on them. Emotionally self-absorbed and introverted, 5w4s can be detached from their environment in a way that irritates others. This is also because they are caught up in their thoughts. They may use their analytic powers to observe people at a distance instead of to understand them better. They can be hypersensitive to critique and moody. They are emotionally delicate but don’t really know how to deal with that emotion. They tend to be reclusive, getting lost in the elaborate mental landscapes they create. In the 5w4, the Four’s tendency to fantasize gets transmuted into thoughts on the fantastic and surreal rather than the romantic. They may become very impractical, not spending their time making or contributing to the world but reading all day or specializing in trivia, for example. There’s also a pull toward dark, forbidden things or ways of self-expression that would bother others. Some are fascinated with horror and the macabre (again, see the list of famous 5w4s above for examples of this). If they become more worried about their possibilities in life and more impractical, they may indulge in self-indulgences like sexual flings, drugs and alcohol.

At the Unhealthy level, 5w4s may succumb to overwhelming depression but have disturbing, aggressive impulses at the same time. The Four’s envy mixes with the Five’s contempt for others; they want to isolate but are sad that it has to be this way. After all, even with Withdrawn types, some level of human interaction is necessary. The emotional and intellectual parts of themselves are at war at this level. If the 5w4 becomes neurotic, he or she will feel deeply alienated, nihilistic and self-hating. They withdraw to an extremely austere existence, trying to eliminate all needs. It’s an endlessly negative and terrifying place. In this place, the lowest Level of Development, suicide is a real possibility.

Careers for the Five Wing Four

However, the site also notes that 5w4s prefer abstract thought to real-world problem-solving. And remember that Riso & Hudson referred to artistic pursuits. So, they can be one or both of these sides of themselves.

I hope this overview gave you a solid foundation for beginning to understand what it means to be an Enneagram Type 5 wing 4. Of course, we can’t ever completely understand what it’s like to be another type or subtype, but the more we can learn, the better. If you’d like to know more about the mirror type of the Type 5 wing 4, the Enneagram Type 4 wing 5 (The Bohemian), take a look at my blog post here.