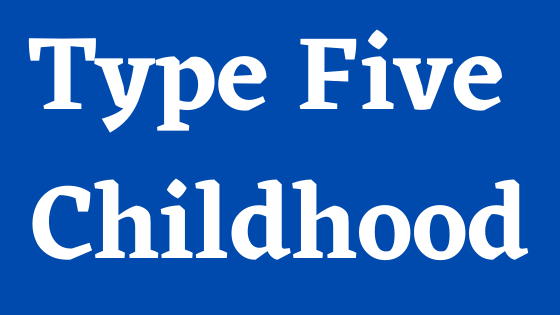 If you’re wondering what an Enneagram Type 5 childhood looks like, it’s probably because you want to understand yourself or someone you love better. So, let’s first have a quick refresher on what it means to be a Five.

The Riso-Hudson name for Type Five is The Investigator. Fives are investigating the world, using their Head Center to understand it in a logical, systematic fashion. They prefer facts and data over emotions, though their emotions can be quite intense. It is said that Fives observe their emotions, for the most part, rather than actually experiencing them.

The Wisdom of the Enneagram describes a Basic Fear for each type, and for Enneagram Type 5, it is the fear of being useless, helpless or overwhelmed. To avoid that fear, a Basic Desire arises. For the Five, it’s to be capable and competent. This causes Type 5 to study the world closely and with deep attention, often focusing on an obscure problem or field of inquiry that they can contribute to.

This makes for a rather solitary life, typically, which most Fives like just fine. They are a Withdrawn type, which means that the boundary separating them from the world is quite permeable. It is easy for them to become overwhelmed by too much interaction, so they withdraw to think and read and study.

They also fall within the Competency group, which means they emphasize being experts and having deep information about a topic. Competency types (One, Three and Five) like to maintain clarity and detachment, which is why they detach from their own emotions most of the time.

Because the Enneagram is full of triads, the Five also belongs within the Object Relations group of Rejection. Along with Types Two and Eight, Fives assume they will be rejected by the world, so Fives withdraw from most people to avoid what they believe (usually subconsciously) is a painful inevitability.

Because of the need to investigate from a distance and to withdraw for study, the Enneagram Type 5 childhood tends to be quieter and more solitary than that of other children. They were quite possibly shy and socially awkward, and this can persist throughout life. It’s as if the Five child can’t quite relate to these strange, emotive, illogical creatures all around them.

Fives would rather study than take part in the standard play of their peers. They often end up with a reputation for being bookworms or computer nerds, focused on the world of ideas and knowledge rather than the physical world of childhood interactions. They often excel in one area of expertise, even as kids. Usually without knowing it, they are anxious about the world and their ability to survive in it, so isolation and retreat seem the safest bets.

Riso & Hudson relate that as children, Fives felt unsafe in their families because it seemed they could become overwhelmed at any moment. Parents who want their little Type Fives to act more “normal” may encourage or even force them into social activities; the littles Fives usually respond with intense resistance. This is another great reason to learn the Enneagram: parents who understand their own patterns as well as those of their children stand a much better chance of parenting with compassion and respect for each child’s unique needs.

Fives grow up with the idea of scarcity and believe that their needs are too great a resource drain, so they convince themselves that they have few needs. They satisfy themselves with few belongings, tend not to pay attention to personal style and typically live amidst Spartan décor. They may forget to eat for most of a day – or longer. Bill Gates, thought to be a Type Five, has talked about how when he was first working on the code for Microsoft, he would sometimes forget to eat and would not sleep for several days. That is the kind of immersive focus a Five can bring to a task, though this kind of behavior can of course be detrimental if engaged in too often.

In their book Personality Types, Riso & Hudson discuss the early childhood development of each type. I want to make it clear that early childhood experiences do not determine a person’s Enneagram type. At least, that’s the theory! It can’t be utterly proven that each of us is born with the brain wiring that determines our type (though perhaps one day it will be), but the going theory is that we are born with that brain wiring.

So, think of this section as how a child who is already a Five reacts to their parents and others who shape their young lives. Some types identify with the nurturing figure and some with the protective figure, but Fives become ambivalent toward both parents due to their formative experiences. These children were looking for a niche within their family system that would result in their protection and nurture, but their Fiveness concluded that there was no such place for them.

As often happens when a person is confronted with a no-win situation, the Five child refused to play the game. Fives instead withdrew to obtain expertise in some subject so that they would have something to offer the family unit. They want to find something they can do so well that they can feel like an equal among the family members. This helps assuage the anxiety that comes from their underlying Basic Fear of being useless or helpless. Surely, the (largely subconscious) reasoning goes, if they can bring something to the table, the Five child will prove himself or herself valuable and stands less chance of being rejected.

This is such an important chunk of information that I’m going to lift it straight out of Personality Types: “Fives strike a kind of unstated bargain with their parents which carries over into all of their subsequent relationships: ‘Don’t ask too much of me, and I won’t ask too much of you.’” Ponder for a minute how that point of view affects how someone shows up in and interacts with the world. Think about the reserve, caution and tension that exist in this point of view. Think about what it costs a Five to interact with you.

Though it’s not a good idea as a rule to go around typing others, here is a list of famous people who are thought to be Type Fives based on their behavior. I offer it here with no guarantee that it’s completely accurate but as a way to look for similarities in yourself or a friend or loved one. As you look through this list compiled by Enneagram Explorations, imagine what these folks may have been like as children, based on what you’ve read above:

Well, that’s a taste of what an Enneagram Type 5 childhood is like. For a deeper exploration, including personal anecdotes from Fives, I recommend The Wisdom of the Enneagram.