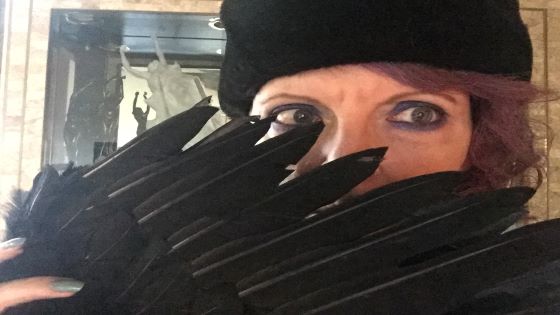 The Enneagram Type 4 wing 5 is called “The Bohemian” by Riso & Hudson. Though a Four at his or her core, the Four with a Five wing shows up in the world differently from the Four with a Three wing (The Aristocrat). To start things on a solid foundation, let’s briefly revisit what a Four is like. If you’re solid on the types, you can skip this section.

The Riso & Hudson name for Four is The Individualist. The larger description they use is “The Sensitive, Introspective Type: Expressive, Dramatic, Self-Absorbed, and Temperamental.” Fours dwell in the Feeling or Heart Center of Intelligence, as do Twos and Threes. This means they process their experiences via their emotions. Like other Heart types, Fours are focused on their image, and shame is the predominant emotion at work. Their shame is pointed at their image, which they think is their identity, so they have a profound feeling of being inadequate and fundamentally flawed. The Basic Fear of the Four is that they lack any true identity or worth.

Along with Fives and Nines, Fours are a Withdrawn type. With a permeable personal boundary, a lot more of the world gets in than they can emotionally manage. When this happens, they have to pull back and isolate. This is why some Fours can be viewed as loners. They typically feel misunderstood and like aliens in the world of people. The vice or cardinal sin of the Four is envy.

What is an Enneagram Type 5?

Here’s a quick review of Type Five so you get an understanding of how this type influences the Four. (Again, feel free to skip this if you know it already.) Five is called The Investigator by Riso & Hudson because this is a Head Center type that wants to specialize in one area of knowledge. Their Basic Fear is of being incompetent or useless, so their Basic Desire becomes to be competent and of use in the world. They tend to observe their emotions rather than process them, as emotions would interfere with their studies. Fives tend to find one area of study, usually off the beaten path, that they can investigate and become an expert at. That way, they reason, they can have something to offer the world. Fives are a Fear type, and they believe their expertise will keep them safer in the world because their knowledge will make them valuable to others.

And now for the main attraction. How is a 4w5 different from a 4w3, The Aristocrat? How does the Five influence come forth in this type of Four? For one thing, this is a double-withdrawn type. Whereas the 4w3 is struggling between being withdrawn at Four and assertive at Three, the 4w5 is withdrawn times two! This is one reason that The Bohemian can be more of a loner than The Aristocrat. However, at least the Four and Three are in the same Center of Intelligence, the heart. The 4w5 has to contend with a heart focus (Four) being modulated by the head (Five), which can create intellectual depth but also inner mental turmoil.

The Wisdom of the Enneagram notes that the standard pattern for the 4w5 Enneagram type is to be more introverted and socially withdrawn. They tend to live in their imaginations, which they find more interesting than the real world. They like symbols, metaphor, the exotic and unexplained. They have a singular way of expressing themselves and lead a more minimal existence, thanks to the Five influence. They are often quite private, letting few if any people into the inner world they have created.

Patrick Oliver has a brilliant perspective on the wings that I’ve never seen before. It has to do with bringing balance to the influence that both wings exert. I’ll quote and paraphrase from his great book, All in the Flow: The Enneagram’s Gift to Prayerfulness.

When Fours are hypnotized by their personality, a strong Five wing can create a kind of double-mindedness: “they become torn between self-pity (from the space of the Four) and self-negation (from the space of the Five), in a see-sawing between heart and head reactions. Such a dilemma leads this kind of Four to become deliberately cryptic to others. They then can become loners, fearing that they are inadequate in themselves and incompetent in their work. They tend to ruminate upon how badly they have performed, and may suddenly distance themselves from others and become morbid, because their self-rejection gets projected upon those around them.”

When free to return the truth of who they are, “the soul of the Four with a Five wing reflects both God’s mystery and wisdom.” Living from this true place “allows them to embody a sense of delicate intricacy and sagacity. These coalesce into an intuitive and sensitive profundity of soul, which shows itself through

· an ability to hold and understand the complexities of spiritual journeys

Without a healthy Three wing, the 4w5 runs the risk of “getting mesmerized and lost in the sea of inner ideas and theories that fascinate them. They may get so overwhelmed by the complexities within them that they feel they’re at a loss to bring to the outer world any of the jewels they have discovered.”

But when Fours with a Five wing are resting in God’s love, they can access a healthy Three wing, which helps them put their ideas into action. “This is expressed in a self-assured and robust spirit of artistry, which shows itself through:

4w5 and the Levels of Development

The book Personality Types by Don Richard Riso and Russ Hudsondiscusses what the 4w5 looks like according to the Levels of Development: Healthy, Average and Unhealthy. Here’s a short description of each.

Healthy Fours with a Five wing “are probably the most profoundly creative of all the types” due to their ability to combine insight and intuition, leading to stunning and “even prophetic” results. Their insights into the human condition tend to lead them to the social sciences and the arts. At this level, 4w5s don’t care as much about what others think of them. This enables them to follow the beat of their own drummer more fully. They can be content creating just for themselves rather than for others. They are likely to have a unique manner of self-expression, as well.

4w5s in the Average range of development speculate about religion and philosophy and are more self-absorbed. There’s a strong intellectual component to their emotional landscape. They tend to be loners. 4w5s may have sudden, amazing insights but often can’t keep that effort up. They are unconventional and independent – hence the name “Bohemian” – and have something of the otherworldly about them. The term “eccentric” fits this type well, too. They are typically secretive, caught up in their own thoughts and are intentionally mysterious and cryptic in their communication. It’s as if they’re demanding that people see how special and enigmatic they are.

When in the Unhealthy range, 4w5s have an intense self-denying and even suicidal aspect as the conflict between the heart (Four) and head (Five) rages on. Their inner landscape is desert-like and fraught with terror. Hopelessness, fatigue and depression are hallmarks of this type’s emotional turmoil at this Level. Their inner torment leads them in a downward-spiraling circle because they won’t communicate with anyone else at this point. Their thinking becomes distorted but they will not accept help from the outside, and eventually, life seems meaningless to them.

That’s a look at the Enneagram Type 4 wing 5: The Bohemian. As you have read through this post, have you recognized yourself or someone close to you? The Bohemian can be a free-spirited, free-thinking artist who helps others see the nature of reality a bit clearer. Or, he or she can be an alienated, tormented soul trapped in their own emotions and thoughts. May you come to appreciate the gifts of the 4w5s and also to have empathy and even suffer alongside this unique and complex type.

And if you’re ready to discover and express your higher calling and purpose, I’ve created a six-part digital course and workbook called “Identity & Destiny Boot Camp.” You can take a look here.